We welcomed to Good Shepherd Rev. James Lindgren and his wife Judy on July 16, 2018.

The following is the article from the Madison Daily Leader on Pastor Lindgren:

Share
Print
Create a hardcopy of this page
Font Size: 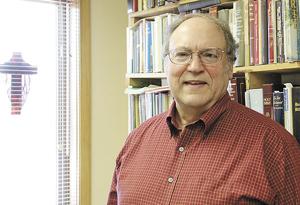 THE REV. JAMES LINDGREN began pastoring Good Shepherd Free Lutheran Church in July. He said he came to Madison to pastor the small congregation of around 60 because he and his wife want to be close to their grandson Matthew, who was born in September.

As a both a pastor and PK (preacher's kid), the new pastor at Good Shepherd Free Lutheran Church has moved around. Having been born in Canada, he even had to establish citizenship at one point.

However, the Rev. James Lindgren is at heart a family man and answered the call to pastor a mission church in Madison because he has family in the area -- a daughter and infant grandson in Sioux Falls.

"We get down to see them every week," he said.

Lindgren and his wife Judy have been married since 1980. They had three daughters together: Jennifer, Stephanie and Allison. Allison lives in Sioux Falls and Jennifer lives in northeastern Wisconsin.

The Lindgrens lost Stephanie in 2012 when she was killed in an accident as a result of icy roads. She was six months pregnant at the time.

"She slid into a semi and was killed instantly," Lindgren said.

Her husband, who had been traveling behind her, was first on the scene. At the time, Lindgren was preparing for a funeral for a 32-year-old and had just finished meeting with the family when he received the phone call. He describes the experience as tough, but said his faith was strengthened through it.

Lindgren assumed his responsibilities at Good Shepherd in July. It's his sixth parish since graduating from seminary in 1981. Previously, he pastored churches in Nebraska, Minnesota and Michigan.

However, he is not new to the region, He graduated from Tri-Valley High School at Colton as a four-sport letterman: cross country, football, wrestling and track. While in high school, he set the school's 2-mile record.

As a pastor, he said he is more conservative than his father who was affiliated with the Evangelical Lutheran Church in America.

"They are more concerned with inclusiveness than with justification by grace through faith," he said, listing one point of difference.

He said he believes the Bible is the Word of God. Lindgren admits that though Lutheran, his beliefs are in some ways closer to fundamentalist evangelical than mainstream Lutheran.

"I believe very strongly in preaching for conversion, conviction and repentance," Lindgren said, adding that repentance is an everyday thing.

He said those looking for a church may find a home at Good Shepherd based on their stance on the Word, commitment to missions and evangelical outreach.

"One strength of this congregation is music," he said.

If you would like to know more about Good Shepherd Free Lutheran Church, here are some options:

* Send an email to

* Visit the I'm New, About Us, and FAQ pages

This page at http://goodshepherdfreelutheran.com was last updated on Oct 25 2020